New to R? Click here for a brief introduction

There are many uses for the sentiment of tweets a company is receiving, a few examples are:

In this project I have explored the use of the Twitter streaming API in R as a means to gather data throughout the period of a day. I then attempted to create some sentimental inferences about the tweets. I’ve tried to walk through some of the code for those who aren’t familiar with R or programming in general.

To get the data I used for this project download all files from my public dropbox folder: Supermarket Dropbox

Firstly we need to authenticate ourselves to Twitter - this is done by a ‘handshake’ just how you introduce yourself in an interview. This is done by firstly creating a Twitter account, then going to apps.twitter.com -> ‘My apps’ -> ‘Create new app’ and filling in the details. If you don’t have a website you can use a placeholder. For example I used the placeholder: test.de/

The key information we need from the next page is the ‘Consumer Key (API Key)’ and the ‘Consumer Secret (API Secret)’. We will store these as variables in R note the keys I display are examples and not my keys. Now we can add our variables into R, insert your keys as required.

After you have successfully run the previous code (and only after!) then we can then save this authorisation certificate and get to the good stuff! To save this simply run:

Let’s get the data!

Now we are ready to search Twitter. I am going to look for tweets that mention any of the UK’s top 5 supermarkets. To do this I look for @asda, @sainsburys, @Tesco, @Morrisons and @AldiUK. If you want to try something else then simply change the vector! For example, if you searched “to:BarackObama” then we would get a live feed of tweets that people are sending to Obama’s Twitter page.

This code will track the tags we give it, only return tweets in english the english language. It will also be persistent so won’t timeout and will save the tweets to the filename tweets.json. Note that the tweets will always be appended, so if you try searching for a different term then you should either delete your old json file or change the file name.

Now we can parse the json file and bring it into R as a dataframe.

Now let’s make use of a great library called Amelia which looks at the missingness of data - This library was named after American Aviation pioneer and author Amelia Earhart, who was the first female aviator to fly solo across Atlantic Ocean in 1932. However, she vanished while trying to establish a record as the first woman to fly around the world on July 2, 1937. No proof was found whether she is alive/dead. 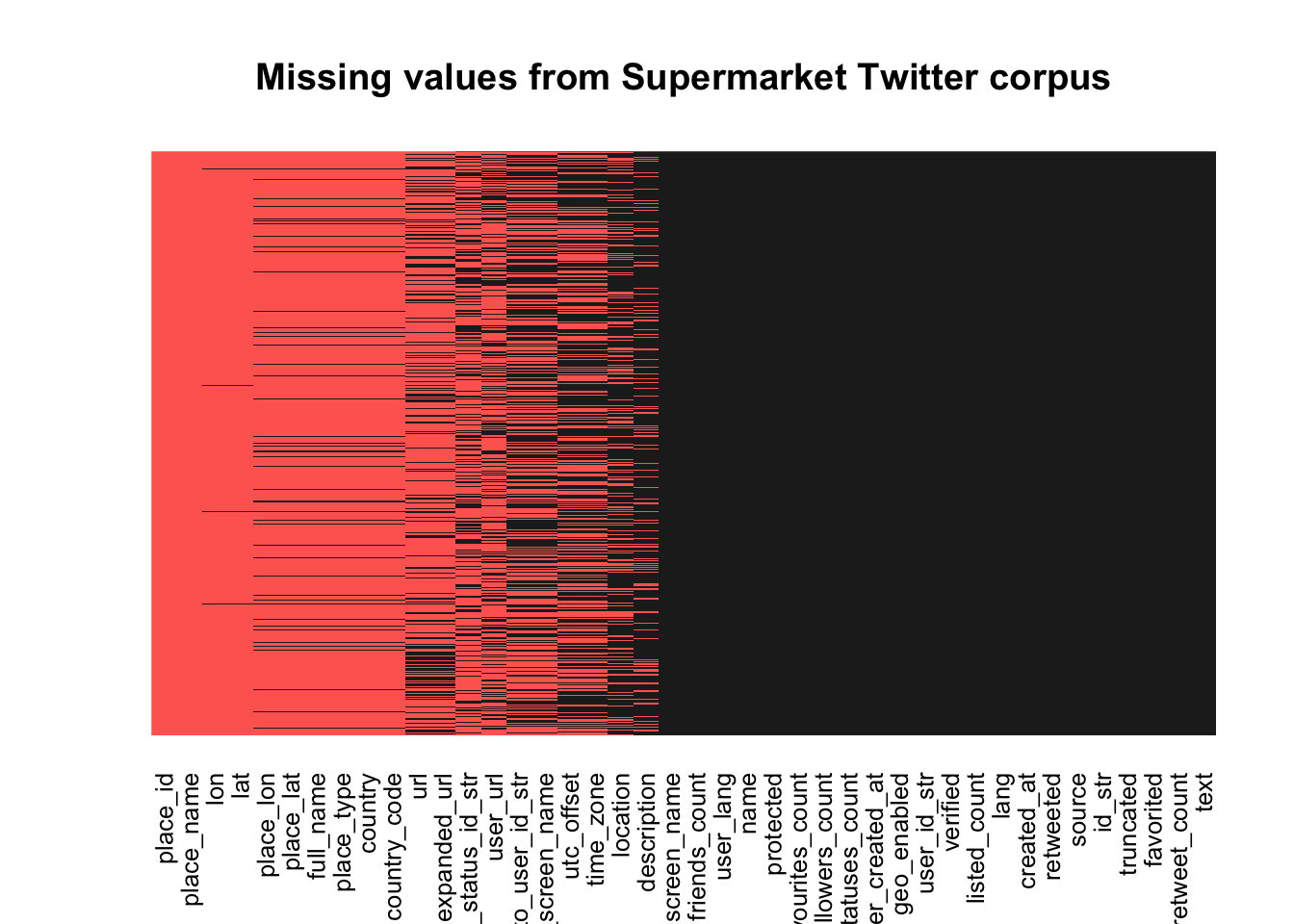 Notice that there are a lot of useless columns in our data frame, so let’s remove the ones we don’t want by setting them to NULL. Let’s also remove any of the columns that have too much missing data to be useful.

Now we have removed all of the data we felt was useless (or too much of it was missing to be useful). Let’s look at our new missingness map. 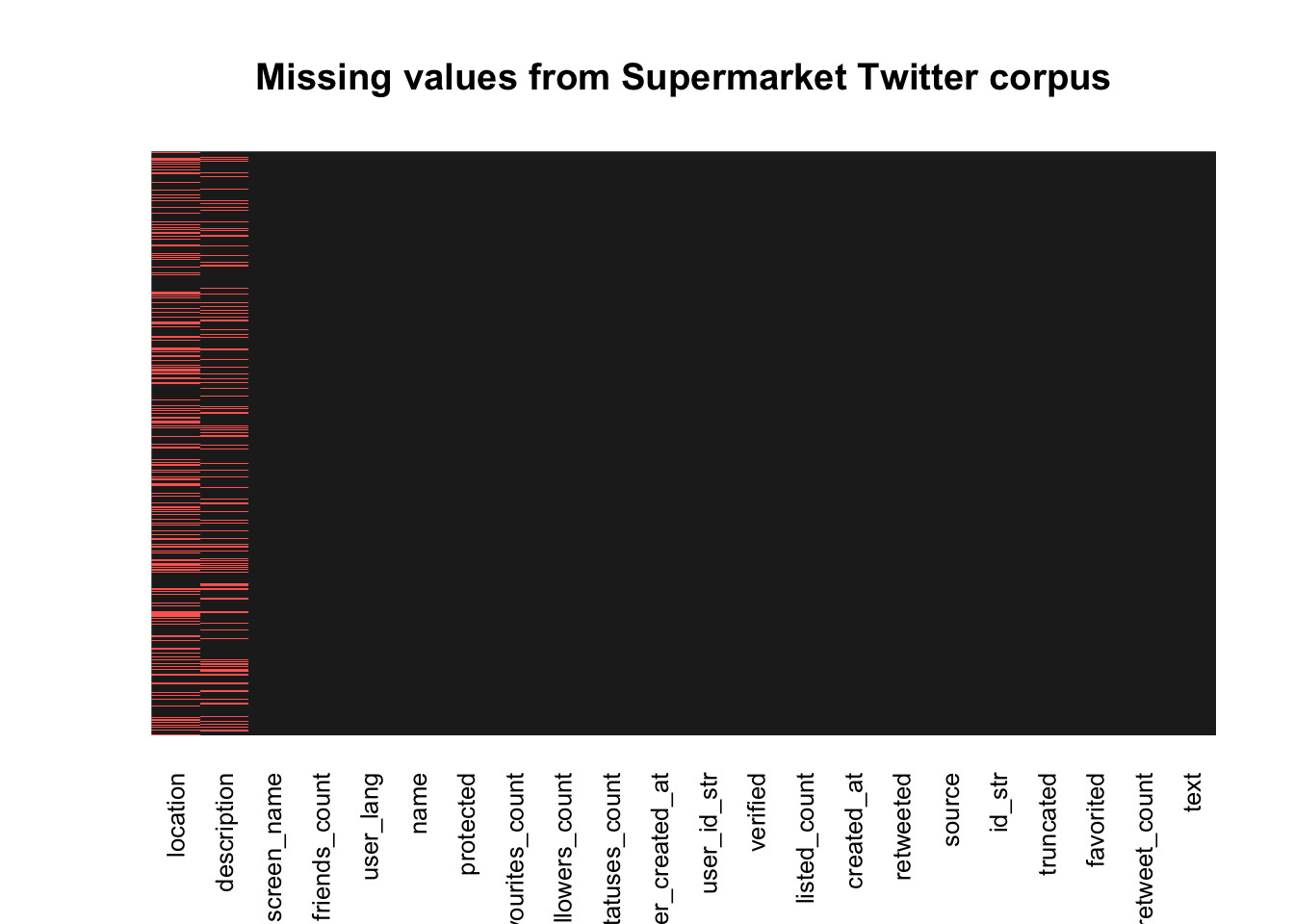 This looks better! Notice that the missing data left is just: The location and profile description of the user as defined in their account settings (not location of the tweet).

Next we should check the structure of the data frame.

A lot of the tweets contain emojis which are in UTF-8 encoded text. To make things easier we will remove these emojis. (This is part of my second project to incorporate emojis as part of the sentiment analysis so look out for it!).

The code below will remove any graphical parameters from the tweet (text), the username the tweet belongs to and their profile description.

Let’s have a final check of the structure of the data frame.

Looks good and clean! Now we will move on to some feature engineering where we will find out what device the tweet came from. We’ll also assign categories for each of the tweets depending on which company the tweet was regarding.

If we look at the head (top of the data frame) of temp$source we can see that this has information about the device the tweet originated from.

Let’s take out the keywords from these such as ‘ipad’, ‘iphone’ and set them as another column called ‘devices’ in our dataframe. Lets also give the column a data structure of a factor. See below for a description of what the for loop is doing.

First we have to make an empty vector to put the values in which we have called ‘source’. Then for all the rows in our dataframe ‘temp’ do the following:

Using the same logic we can get the company the tweet was about.

I have made a basic function to use here which will just give us a few summary lines about our data. This can be useful if you want to keep checking a live stream of data.

Now we have finished cleaning and prepping our data. We can try to come up with some metrics to describe the sentiment of the tweets. The technique I have used in this project is just a basic ‘bag of words’ which come from a dictionary of positive and negative words. However, I have also included a phrase dictionary. All of these dictionaries can be edited, so add anything you believe may come up in a tweet. Personally I added ‘out of date’ to the phrase dictionary, these phrases will depend on the type of tweet. For instance no one would tweet with the phrase ‘out of date’ to @Build-A-BearWorkshop.

I also added some bias to the model whereby if any phrase from the dictionary comes up then it would be more negative or positive than just the bag of words dictionary. This is because a user could tweet ‘It’s a good job I checked the sell by date! These green eggs and ham are out of date!’. In the original ‘bag of words’ model the word ‘good’ would have been positive and given a positive sentiment to the tweet (+1 overall). Now with the phrase dictionary included it would still pick up ‘good’ (+1) but it would also pick up ‘out of date’ (-2) so the overall tweet would have a negative sentiment of (-1). This is open to further enhancements, but for this project I just wanted to get a working model.

Lets see the code! First we need to import our dictionaries.

Now we are finally ready to predict the sentiment of our tweets! Lets pass our dictionaries and temp$text into our newly created function and then add the scores to our dataframe ‘temp’.

We haven’t seen a plot in a while so let’s make some!

I have edited a ggplot theme here for some nicer visuals. Then set it as the default theme for my plots.

Note I have tried to make the visuals more impacting at the cost of many extra lines of code by assigning the company colors to the graphs so that it is an exact match of asda green or morrisons yellow etc.

The first plot we will create is of the number of tweets that mention the companies. 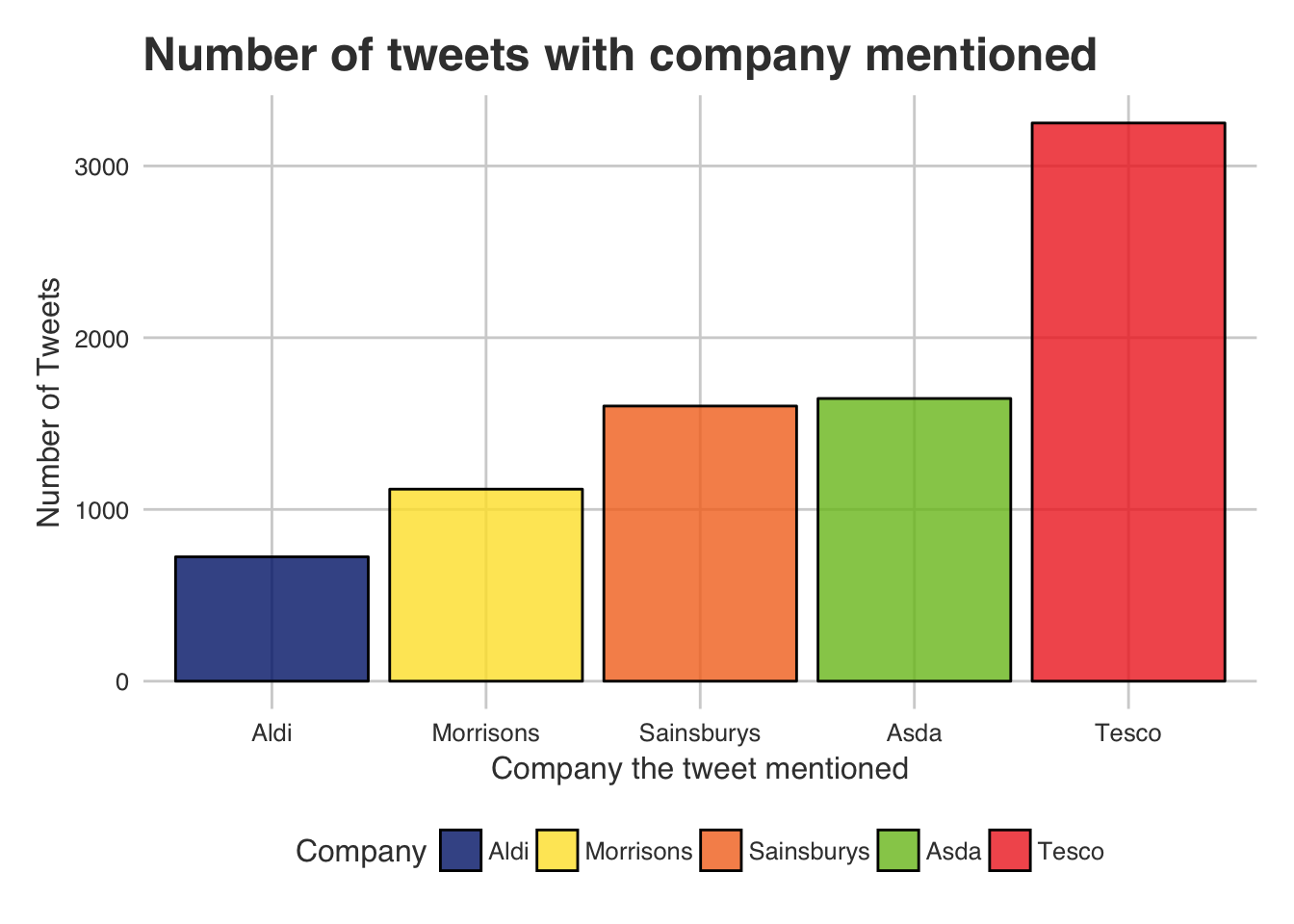 As we can see, currently Tesco seems to have a massive online presence. At Least a lot of mentions, we are yet to see if they carry good or bad sentiments! Also notice that Aldi does not receive many tweets. An interesting thing to look at would be the comparison that these companies spent on online marketing. If anyone could get approximates for this I would love to include it. 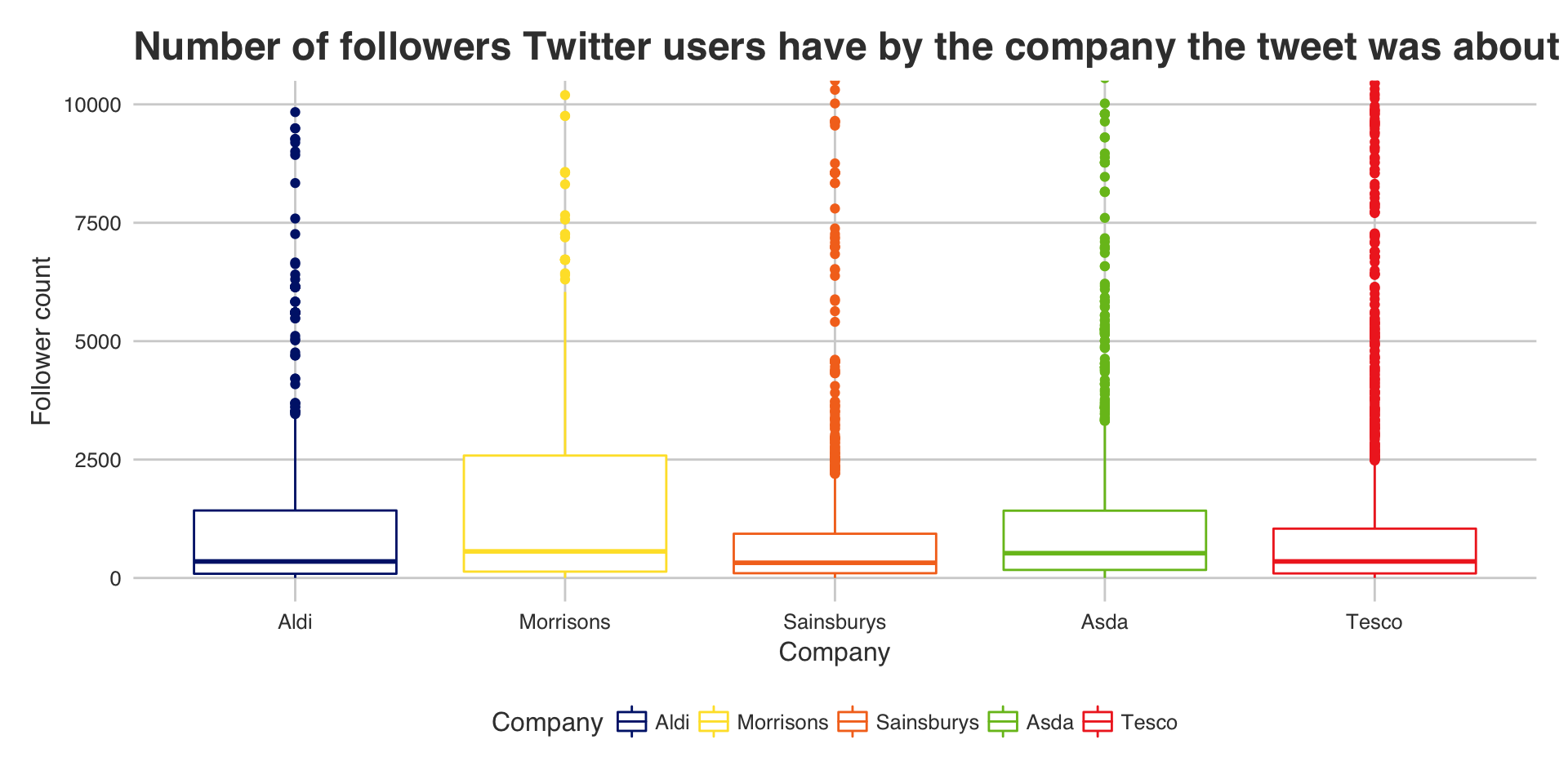 They all seem to have a similar distribution with Sainsburys coming bottom and Morrisons coming top.

Another plot we could make would be the source that the tweets are coming from. 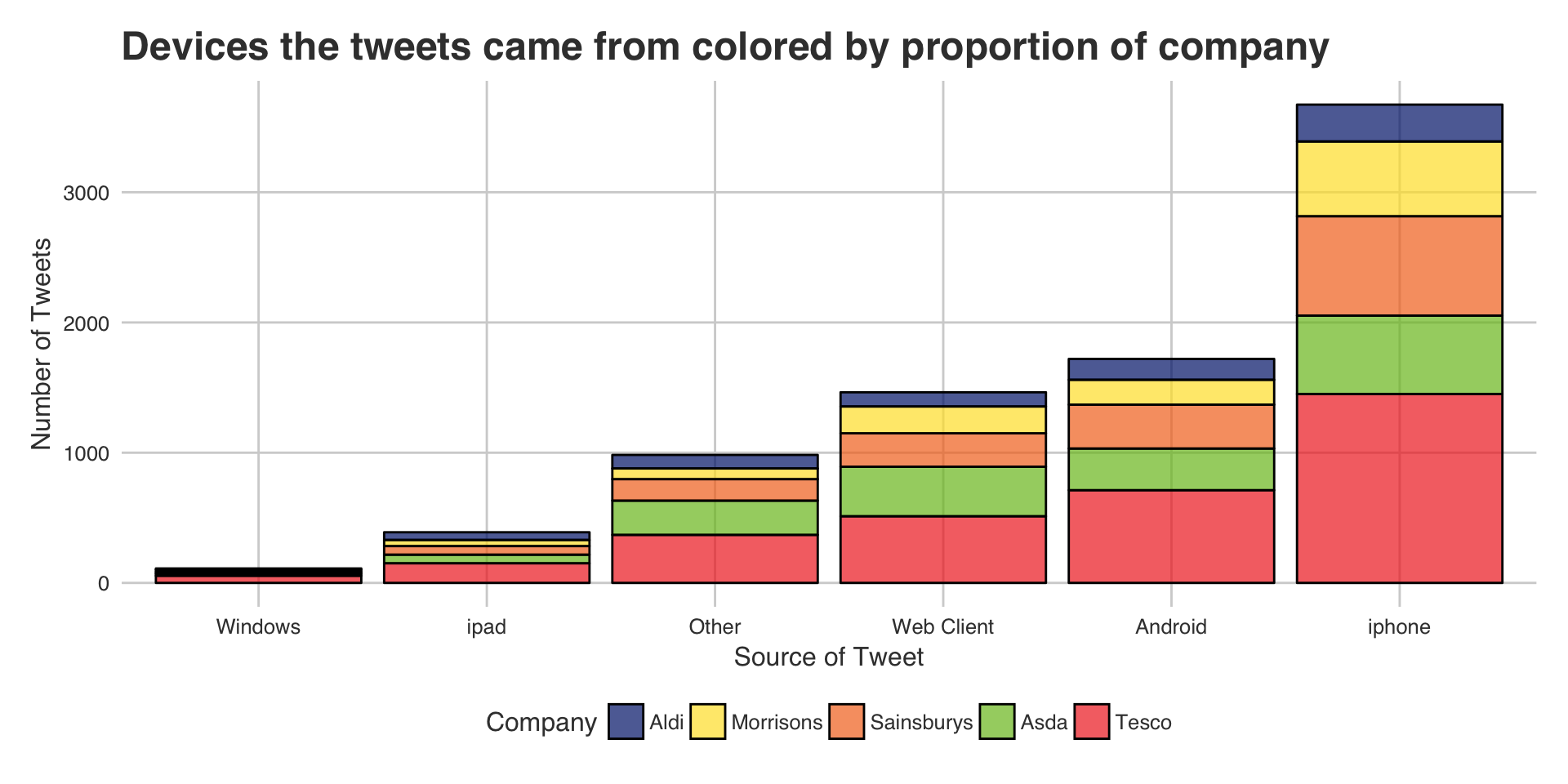 Not surprisingly the majority of the tweets are coming from apple devices. All of the companies seem to have an even distribution of customer devices, This is expected since the companies in question are all very similar. If the companies were instead Iceland and Waitrose, then we could possibly see slightly different distributions There may be more ipads and iphones - since people with a higher disposable income are more likely to shop at waitrose than people with a lower disposable income. (Purely hypothetical)

Now let’s look at the sentiment distributions our ‘bag of words and phrases’ model has given us. 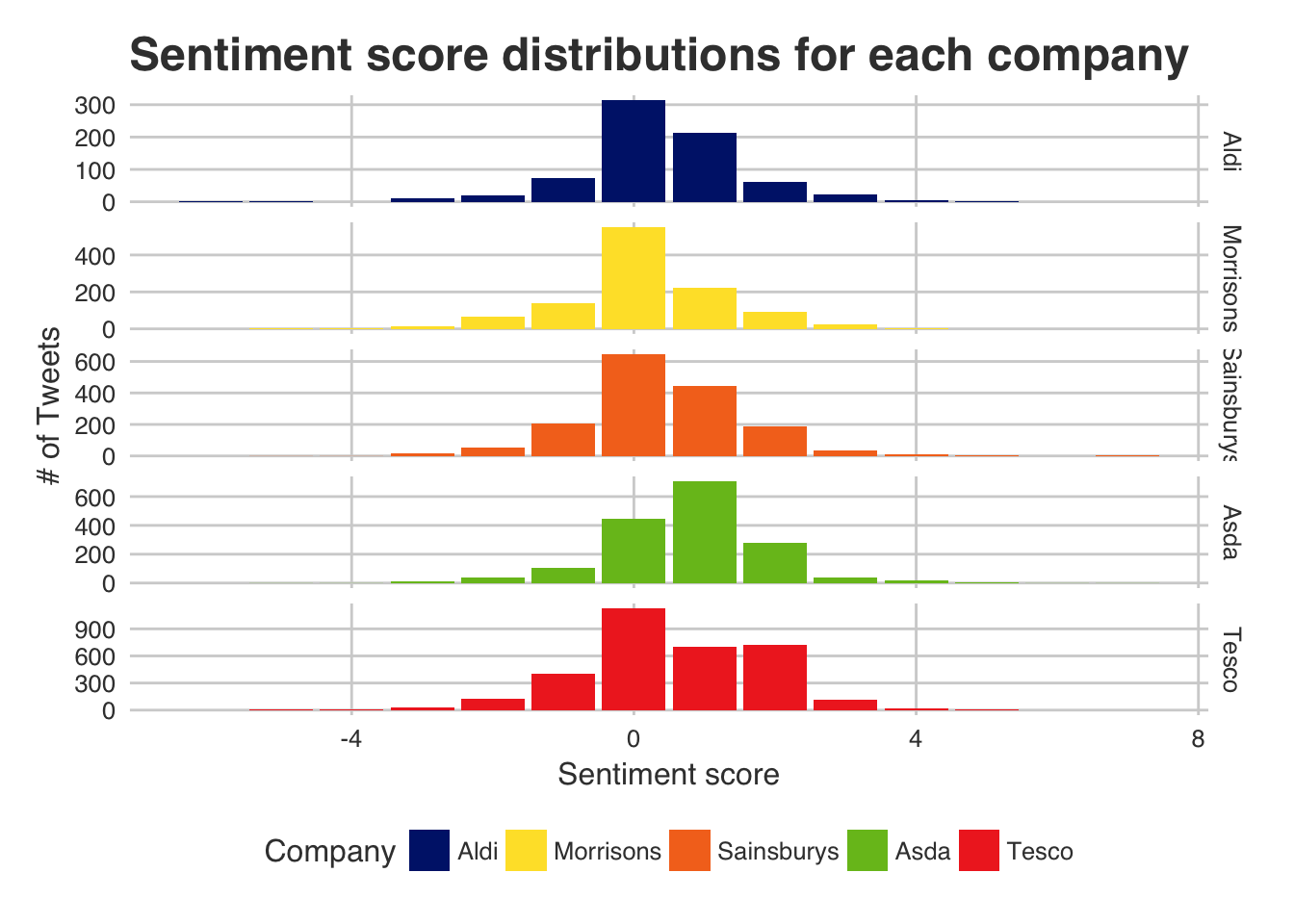 Interestingly Tesco and Asda seem to have the highest sentiment from the tweets, Morrisons seems to be very much neutral whereas Aldi and Sainsburys seem to be equal with slightly positive sentiments.

Similarly we can see if there are any different sentiments by the user’s device. - Maybe everyone with an android device complains but customers with apple devices are happier and send compliments to their favorite supermarket? 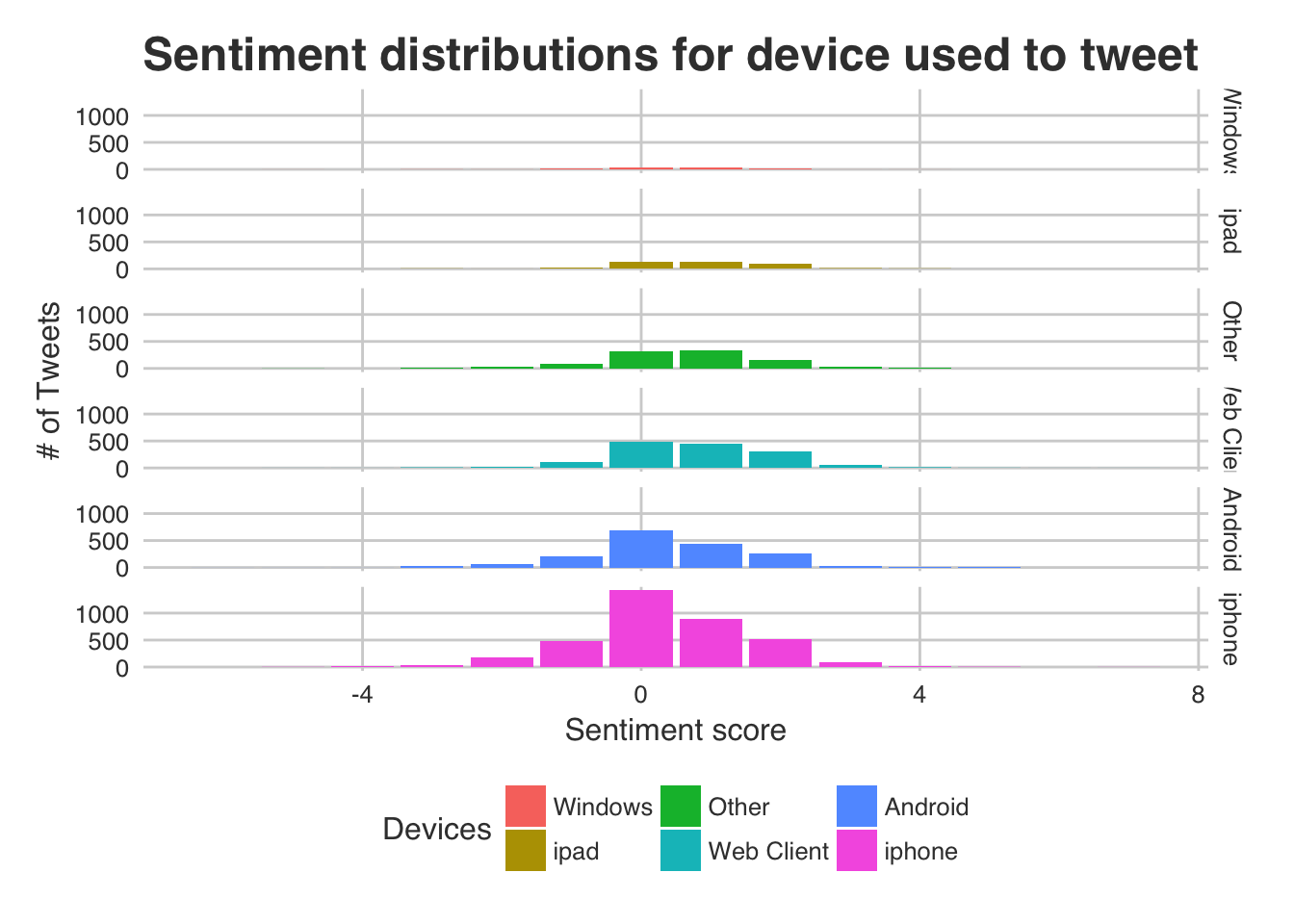 If we look at the ‘web client’, ‘ipad’, ‘windows’ and ‘other devices’ facets they seem to have more of a positively skewed sentiment. ‘iphone’ and ‘android’ are very similar in their sentiment distribution and are only slightly positive. So with this sentiment model and dataset it appears that android users aren’t as willing to give out compliments! 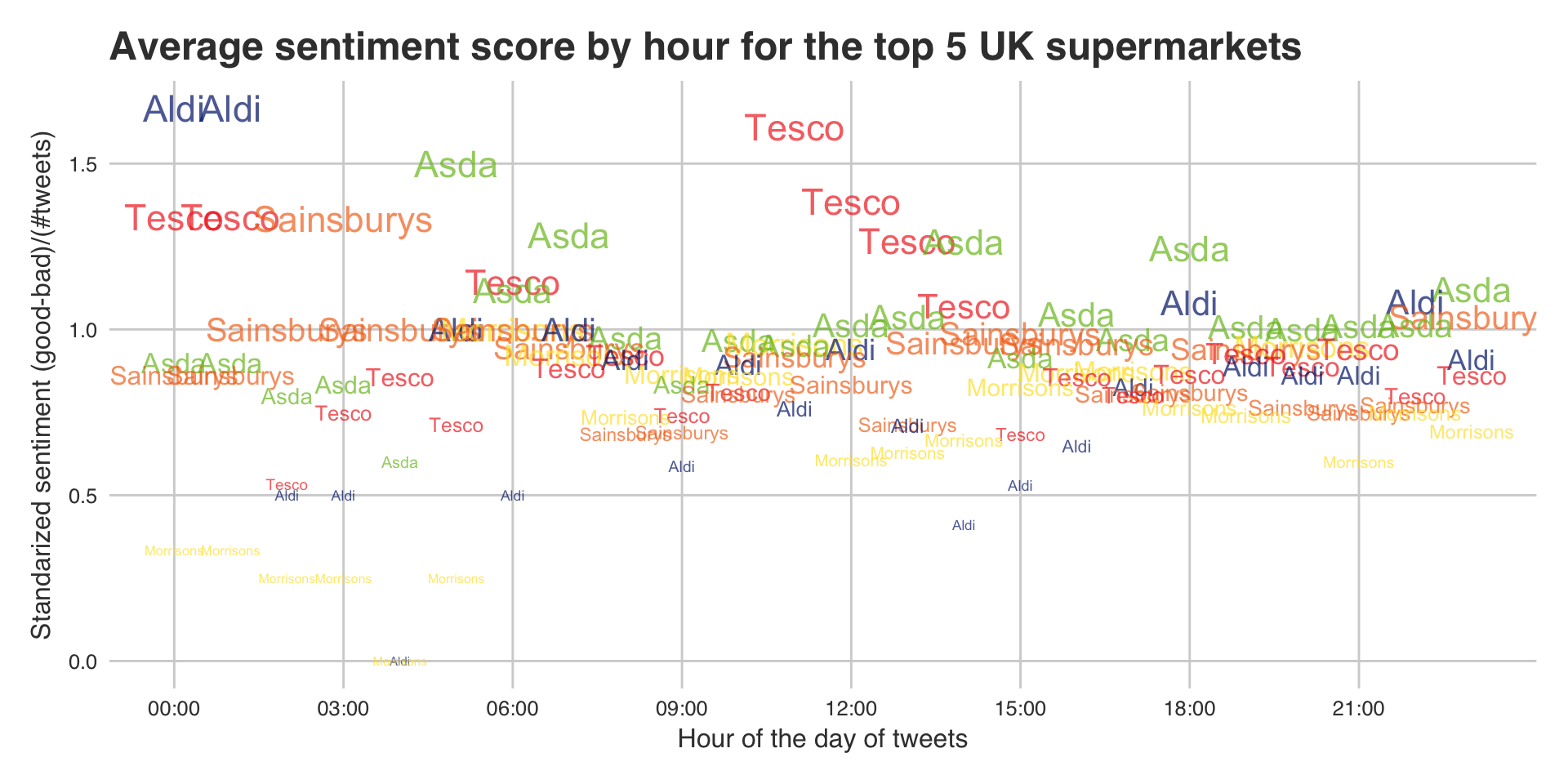 I’m sure there was an easier way to do all that but I was tired while writing it and the hack and slash method worked and wasn’t too slow! If the words are too much and you feel like this is overcrowded then do not fear! I have made another graph that may suit your needs.

I would love to have any feedback on this little project so if you have any opinions do let me know! Similarly if you want any help reproducing this or something similar and need any tips do get in contact.

You’ll notice that the json file will get large very fast and it has a lot of columns that we dont want. One quick remedy (though definately not the best) would be as follows:

Run the twitter trawler from your command prompt in the background so it is constantly running - this means you’ll continously gather your data. Then in anther command prompt run the following script. It will take the json file and do all the data manipulation we set out in this tutorial and save the resulting file as a csv. I have set the variables at the top so they can easily be changed.

If you use the code ‘as is’ it will look for the json file ‘example.json’ if it can’t find it then it will wait 30 seconds before trying again. Once it has found the file it will repeatedly wait 5 minutes before trying again until the file is greater than 500000 bytes before it converts it to a csv. If it is the first entry into the csv file it will include the headers, if it isnt then it will just append to the csv. The final csv output will be called ‘Temp.csv’.

(Also note that each time we clear the old json file we have a chance of removing a tweet mid way through proccessing, so the longer the time period between conversion the less tweet loss.)